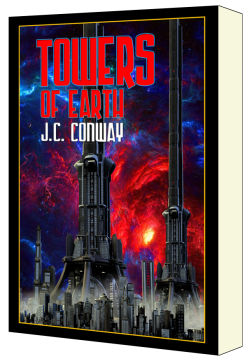 At the brink of an impending Dark Age, 15-year-old Allison Taylor escapes Earth on a colony ship to the stars. But a catastrophic Quark Drive failure forces a desperate, near-light speed return to Earth a millennium into its future. Allison is surprised to find Earth in a “New Renaissance” and to see the Great Geostationary Towers her father engineered still stretching majestically from ground to high orbit, now housing Earth’s billions. But things aren’t what they seem. In Towers of Earth Allison faces world-changing challenges as she struggles against her deepest fears and questions her greatest hopes.

Towers of Earth is a suspenseful science-fiction adventure novel with romance, mystery, humor and heart warming optimism. It is slated for publication in 2017 in eBook and paperback formats (cover art pending) by Double Dragon Publishing.

Welcome to the New Renaissance… Don’t plan to leave…

TOWERS OF EARTH is available as an e-book at:

Other venues pending. The print edition will be available soon.

The following stories are available for e-readers. A few are in MOBI format only. Others are available in a variety of formats. You can also see all of these listed at my Authorgraph page, where readers can request electronic signings from authors.

The following short stories are available as stand-alone e-books, and generally priced for under a dollar:

The following two books are also available for e-readers. One is a stand-alone novel, the other is an anthology of some of my short stories:

A collection of short stories by J. C. Conway. From asteroid bars to a child’s front yard, from the eyes of a veteran star pilot to the paranoia of a city elf, nothing can be taken for granted. The only thing that can be relied upon is that J. C. Conway’s worlds are far from certain. They are at times uplifting, puzzling, depressing or funny. But each offers a glimpse into some aspect of humanity, be it pleasant or otherwise. Most of the stories in this anthology are flash fiction–less than one-thousand words and good for a quick read. Several are a little longer, but worth the extra few minutes. Enjoy the spin around the universe.

Andrea had one goal in life, a quiet career as a mainstream archaeologist—and she’s one ancient secret away. But when she is teamed with maverick prodigy Daniel Fuchs, she soon realizes his wild theories may sidetrack her career. Her smartest move is to expose him and that is exactly what she plans to do. Except… there is a chance his theories may be right. As outside forces mount, Andrea and Daniel find their careers on the brink of ruin. Who can she trust? To survive professionally and emotionally, Andrea must decide between what is expected and what she believes as time runs out and the bulldozers poise to level the site.