every year. To be a member of the World Science Fiction Society, a person need only purchase membership in the World Science Fiction Convention for a given year. This year’s convention will be Loncon 3 in London, England. There are different levels of membership, some cheaper and which do not involve physical presence at the convention. I, for example, have been a Supporting Member for both of the past two, which grants full Hugo Award voting rights.

WSFS members are permitted to nominate more than one piece per category, but they can’t nominate their own work. I encourage you to nominate as many 2013 short stories as you believe deserve the honor. Last year there was a shortage of short stories nominated, and so there were fewer from which to select for the final ballots. 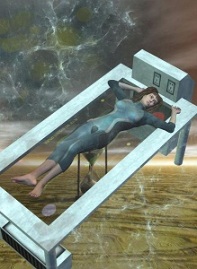 “Love, Death and Overlapping Bosonic Singularities” is a unique science-fiction romance. It features a middle-management woman in a cosmos-threatening bind. It was published in The Lorelei Signal, edited by Carol Hightshoe, April 7, 2013, and is still available to read online. It was also published in Print in Mystic Signals, Issue 18. The story begins at a deposition. Amy Budge knows the attorney sitting across from her. He does not know her. But he isn’t who he thinks he is. To understand that, and to understand Amy’s dilemma, read the story. As the first scene progresses, the deposition begins:

The court reporter faced Amy and issued an oath. Amy promised to tell the truth.
As if they could take it.
Pat smiled. “I represent Peterson-Meson, Inc., and I’d like to ask you about the Boson Vault Project.”
Amy perked. Interesting. Pat never before mentioned the project. Was that a good sign?
He eased into it. But finally: “—and isn’t it true, Ms. Budge, that your department promised to meet the specifications of the Vault Project?”
“Yes!” she said, sitting straighter. Go ahead. Ask.
He meandered too much with his questions…yes, yes, no, right, not exactly…come on already.
A familiar quiver tickled her core.
Already?
She blew a puff of air. Pat thought he had all the time in the world.
You don’t!
He asked another unimportant question, which she ignored.
She leaned forward to command his attention. “Aren’t you wondering if we met the specs?”
She watched his eyes. Not just the dreamy blueness—but the thinking—a teeny little double-take. Good.
“Okay, Ms. Budge—”
“Amy.”
“—Did you meet the Peterson-Meson specs.”
She leaned back. “Yes.”
He frowned. “You met them?”
“Yes, Pat. We did.” Chew on that, cute cakes.
He rifled through papers. “Then…why didn’t you deliver?”
Her peripheral vision wavered. Time fleeted. Crap! “Listen—the problem wasn’t performance—it was the project itself.”
“But you admit you didn’t—”
“Look at me.”
Pat glanced up.
“It’s being delivered—as we speak, in new combinations, repeatedly…it’s being delivered.”
He frowned. “How—”
It was about to happen.
“Your Boson Vault fractured the universe,” she blurted. “Whatever or whoever you think you are right now—you’re not.”
“What are you—?”
“No time to explain,” she blurted. “But trust me: it’s a very bad idea to filter and store large quantities of isolated bosons. The vault created four simultaneous, overlapping ‘bosonic singularities’ cracking the universe—”
“Four?”
“One for each Category Chamber.”
“That would be five—”
“Apparently not!” she gasped. “The fifth chamber was empty, which triggered the catastrophic result.”
“I don’t understand.”
Amy drew a deep breath and unclenched her hands. He was trying. No wonder I like him. She connected with him somehow every time they met.
“I don’t either. I’m management. But Hugo is adamant about the null chamber. I do know this moment won’t last—soon you’ll be gone. It rearranges again; trying to settle back to stable.” She felt like a lunatic. “We’ll meet again,” she said. “But you won’t remember. It’s—”
“Are you suggesting reality isn’t fixed?”
Wow, he gets it. Finally.
Amy nodded.
“Because of the project?” …

Things get strange after that. Mystic Signals, Issue 18, includes 24 short stories, most previously published at The Lorelei Signal or Sorcerous Signals. It is available at Amazon and Lulu for $12.00.

If you are looking for other possible stories to consider for nomination, at least one place to look is John Scalzi’s blog, where authors are promoting their own or others’ work for consideration.

Whether you nominate “Love, Death and Overlapping Bosonic Singularities” or not, I hope you enjoy reading the story and I encourage you to participate in the nomination and selection of the Hugo Winners in 2014.