Conquest of the Moon

CONQUEST OF THE MOON is an inspired and inspiring non-fiction book by Wernher von Braun, Willey Ley, Fred Whipple. Edited by Cornelius Ryan, published in 1953, describing in detail the authors’ vision of a 50-person lunar mission based on upon then-existing infrastructure. I remember reading and re-reading this book and ogling over its pictures and diagrams from as early as I can remember discovering books.

The book expanded on a series of Collier Magazine features. The proposed mission involved three 160′-long moonships that would be assembled in Earth orbit next to the space station over a period of eight months. A total of 360 flights of reusable 3-stage rockets would be required for all materials, supplies, and crew, with a full 346 of the flights bringing exclusively propellant. All three ships would have crews, with one ship being a supply ship with a small crew to be left behind, and with room for its crew to join 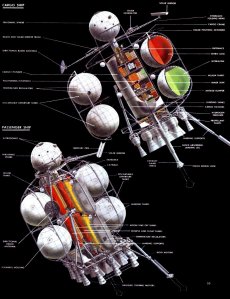 the other two on the return. It was to be a 5-day trip to the Moon. The mission involved disposable fuel tanks. The expedition would explore the lunar surface for six weeks with no room to spare on supplies.

The purpose of the book was to describe a first lunar expedition. Many of the ideas, with modification and a little imagination, can be seen in the lunar missions that actually occurred less than 20 years later after a great deal of advancement in propulsion, materials and technology. The entire design as the feel of engineering possibility, and would still be a great blueprint for a retro-sci-fi story about a trip to the Moon before the 60’s.

Little was known at the time about whether it would be worthwhile to repeat the expedition or whether the Moon could hold any long term value as an outpost. But regarding the possible future, the book states, on page 86:

Suppose we turn up a great store of raw materials; maybe then we’ll want to recommend setting up a permanent community. We can make it practically self-supporting, securely encased inside a great plastic dome with its own synthetic atmosphere. Such an establishment could serve as a superb scientific laboratory — especially for astronomy and for research work requiring a vacuum; or as a springboard for further ventures into space. If we can manufacture our own fuel on the moon, which is a possibility, we can make tremendous savings in the launching of a spaceship.

The book is not cheap. Used copies sell for more than $40 online. But that’s still a lot cheaper than a standard college textbook, and it’s possible to pick up copies in used bookstores (with some luck). In any event, it’s a great read and a real insight into the minds of the forward thinkers of the time. It is also important to note that the work was very well received, speaking volumes about the forward looking mentality of the people of the era.

This entry was posted in Science and tagged Conquest of the Moon, Moon landing, Wernher von Braun. Bookmark the permalink.

1 Response to Conquest of the Moon