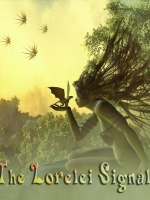 is now published at The Lorelei Signal. A young girl determined to find real fairies goes hunting on a very special day. But is she prepared for what she will learn when she finds them?

The Lorelei Signal, edited by Carol Hightshoe, is a quarterly web-based magazine dedicated to featuring strong female characters in fantasy short stories. “Females in the story should have the same strength of character as their male counterparts and not be there as window dressing.” The title of the magazine was taken from the Animated Star Trek episode in which Lt. Uhura had to take command of the Enterprise after the men fell under a siren song.

The Lorelei Signal is free to read, but it pays its authors up front and asks for donations to cover the cost of the publication and pays 75% of all donations above the initial author payments to its artists and writers per issue. The remaining 25% covers operating expenses. If you enjoy a story or the entire issue, please consider donating. The Lorelei Signal asks (but does not require) that donations be at least $1.00. PayPal charges the magazine $0.30 for each transaction.