Questions About the Number of Human Species 1.8 Million Years Ago My novel, Hearts in Ruin, asks whether human civilization fluctuated more than we realize within the hundred-thousand-year span to the present. But that span is just a fraction of the time men and women have walked the Earth, and the silent mysteries of that span still await discovery.

Fortunately, new information is uncovered every year shedding more light (or perhaps sometimes confusion) on the question of human origin and the varieties of mankind over the past million, or even two million, years.

For instance, a paper published last Fall in Science details a 1.8 million year old skull that has stirred a paleoanthropological debate because of the suggestion it shows that Homo habilis, Homo rudolfensis and Homo erectus are all part of a single evolving lineage that led to modern humans. Opponents of the theory say there is still evidence that at least three distinct species of humans co-existed in Africa.

The new cranium and mandible represents the world’s first completely preserved hominid skull from the early Pleistocene. The cranium has a small brain case at 546 cubic centimeters and has a large prognathic face, meaning that its jaws project beyond the upper part of its face. It seems to have close structural similarities (morphological affinities) with the earliest known Homo fossils found in Africa.

Based upon the features of the skull, the paper concludes that the diversity seen in the African fossil record around 1.8 million years ago most likely reflects variation between groups of a single evolving lineage rather than species diversity.

Further, it opines that the single lineage is Homo erectus, with specimens previously attributed to H. ergaster reclassified as a chronosubspecies, H. erectus ergaster. As the Dmanisi population most likely originated from an Early Pleistocene (2.58 – 0.78 million years ago) expansion of the H. erectus lineage from Africa, the paper places it within H. e. ergaster and formally designate it as H. e. e. georgicus (referring to the samples’ geographic location).

H. habilis and H. rudolfensis fossils require further testing to determine whether they too belong to a single evolving Homo lineage.

Identifying the hominid groups and identifying variation within the populations will aid in understanding the evolution and dispersal of early Homo. 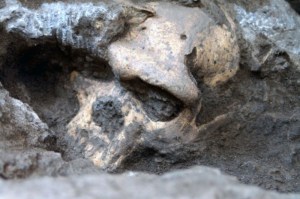 Not all palaeoanthroplogists agree with these suggestions or conclusions. A previous paper sought to confirm taxonomic diversity in early Homo, showing that three newly discovered fossils, aged between 1.78 and 1.95 million years old, suggested two contemporary species of early Homo, in addition to Homo erectus, in the early Pleistocene. This finding added further support to the classification of a skull found in 1972 as a separate species of human, Homo rudolfensis. The skull was the only example of this species which contributes to the contention over its lineage.

Unlike a certain competitive antagonist in my novel, most scientists in these fields develop and discuss theories openly and, while they disagree regarding conclusions, all strive to sift through the clues to develop a theory that ultimately best reflects the reality of humanity’s obscure past. It is clear from these recent finding and discussions that the Dmanisi site still has much more to offer in discoveries of humanity’s lineage and there are more clues unquestionably awaiting discovery.

1 Response to Questions About the Number of Human Species 1.8 Million Years Ago