On Sunday, August 24, the OC Sisters in Crime and SoCal Mystery Writers of America will present WOK ON THE WILD SIDE: Asian Themes in Crime Fiction, 1:00 p.m. – 3:30 p.m. The event includes an Asian Buffet Luncheon inspired by an Asian-themed panel:

The panel will be moderated by Edgar Award Winning Novelist, Naomi Hirahara.

Lisa Brackmann has worked as an executive at a major motion picture studio, an issues researcher in a presidential campaign, and was the singer/songwriter/bassist in an LA rock band. Her debut novel, ROCK PAPER TIGER, set on the fringes of the Chinese art world, made several “Best of 2010″ lists, including Amazon’s Top 100 Novels and Top 10 Mystery/Thrillers, and was nominated for the Strand Magazine Critics Award for Best First Novel. Her second novel, GETAWAY, won the Los Angeles Book Festival Grand Prize and was nominated for the T. Jefferson Parker SCIBA award.

Steph Cha grew up in Encino. She studied English and East Asian Studies in college, then went to law school, where she started writing fiction in earnest. She took the bar, but spent a year on her parents’ couch revising and shopping FOLLOW HER HOME, which she sold to St. Martin’s Minotaur in the summer of 2011. FOLLOW HER HOME came out on April 16, 2013. Steph Cha’s second book, BEWARE BEWARE comes out August 12, 2014, with a third book coming soon. Steph Cha publishes other things here and there, primarily freelance book reviews and food writing for the Los Angeles Times. She splits her time between writing and working as a temp attorney.

Kim Fay was born and raised in Washington State. She lived in Vietnam for four years and has been traveling regularly to Southeast Asia for more than eighteen. A former independent bookseller, she is the author of the historical novel THE MAP OF LOST MEMORIES, a 2013 Edgar Award finalist for Best First Novel by an American Author, and the food memoir COMMUNION: A CULINARY JOURNEY THROUGH VIETNAM, winner of the Gourmand World Cookbook Awards’ Best Asian Cuisine Book in the United States. She is also the creator/​editor of the To Asia With Love guidebook series. 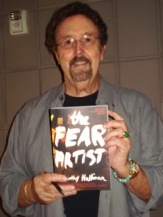 Timothy Hallinan is an American thriller writer, based in Southern California and Southeast Asia. In the 1990s, he  created the erudite private eye Simeon Grist, who appeared in a total of six novels, all set in L.A. The series was widely and well reviewed, with some titles appearing on critics “Ten Best” lists for the year in which they appeared. Timothy Hallinan returned to publication in 2007 with a second series, set in Bangkok, where he’s lived on and off since the early 1980s. The new series features a rough-travel writer who has settled in the Thai capital. The first book in the series is A NAIL THROUGH THE HEART. Professional affiliations: PEN USA, Authors Guild, Historical Novel Society, Sisters in Crime, Sisters in Crime LA and Mystery Writers of America.

Moderator Naomi Hirahara, born in Pasadena, California, is the Edgar Award-winning author of the Mas Arai mystery series, which features a Japanese American gardener and atomic-bomb survivor who solves crimes (SUMMER OF THE BIG BACHI, GASA-GASA GIRL, SNAKESKIN SHAMISEN, BLOOD HINA and STRAWBERRY YELLOW). Her new mystery series with a female twentysomething LAPD bicycle cop, MURDER ON BAMBOO LANE, was released this year. Her next in the series, A GRAVE ON GRAND AVENUE, will be released in 2015. Naomi Hirahara also has written a middle-grade novel, 1001 CRANES, which was chosen as an Honor Book for the Youth Literature of the Asian/Pacific American Award for Literature in 2009. A former editor of the largest Japanese American newspaper in the U.S., she also has released a number of nonfiction works. A number of her short stories have been included in various anthologies.

Please RSVP as space is limited:

The event is free to members, and is open to the public.

SISTERS IN CRIME‘s mission is to promote the professional development and advancement of women crime writers to achieve equality in the industry. The Orange County chapter of Sisters in Crime holds monthly meetings for its members, their guests, and visitors. It supports member authors by attending and sponsoring book signings at local bookstores.

THE SOCAL CHAPTER OF MWA covers members in California and Nevada below the 36th parallel, as well as all of Arizona and Hawaii. It’s chapter services include:

This entry was posted in Conference, Mystery, Writing and tagged Edgar Award, Mystery Writers of America, Sisters in Crime. Bookmark the permalink.