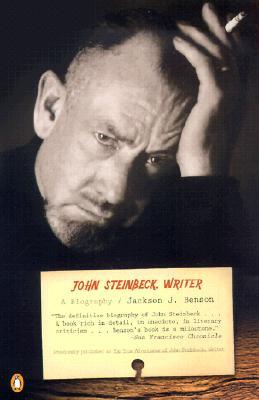 John Steinbeck (2/27/1902–12/20/1968) is a well-known American author and needs no introduction. Most folks in the United States have read at least one of his stories in high school (for instance his novellas, The Pearl and Of Mice and Men have been a regular part of the freshman English curriculum for a long time). His style is plain and direct. His characters are believable and accessible. His themes are strong, his empathy for people is clear, and his sense of humor is striking, fairly well tempered, and sometimes subtle.

Steinbeck grew up in Salinas, California, and many of his works pay homage to the place and era of his upbringing. His best known novels are probably The Grapes of Wrath and East of Eden. His well-known humorous words include Tortilla Flats and Cannery Row. A number of his works have become movies, some of them several times.

I’ve enjoyed each novel I’ve read by Steinbeck, including all of the ones mentioned above. Another exceptional book is In Dubious Battle, which is the first of his California series and Dust Bowl works. It follows the events involving a young man recruited by “the Party” to instigate an organized labor rebellion of fruit pickers in the 1930s. The title is well-chosen and the plight of the workers, as well as the protagonist, is palpable and engaging.

A film adaptation of In Dubious Battle has finally been made, directed by and starring James Franco, with an exceptional cast, including Robert Duvall, Vincent D’Onofrio and Nat Wolff as the main character, Jim.

Overall, Steinbeck was a unique writer with a strong voice. His words reduce “struggle” to its powerful common denominators with a sense of humor and sense of theme that are accessible, enjoyable and lasting. Happy Birthday, John. Thank you for all you have given us.