From Keck: “Solved! 40 Year-old Mystery on the Size of Shadowy Galaxies” 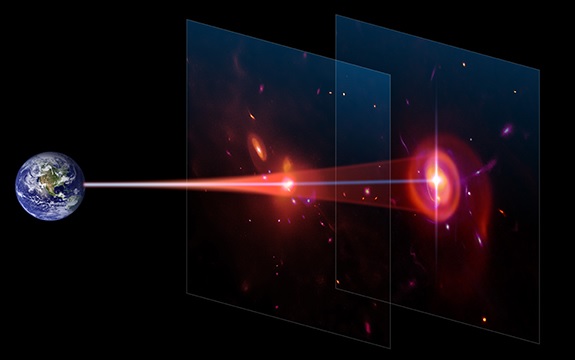 Artists impression of the power of background galaxies to measure the size of gas clouds as compared to the conventional method of using quasars. The plane to the far right shows the background galaxy and overlaid in the center of the galaxy is a bright white light representing a quasar. The DLA gas cloud is shown at the center of the plane in between the galaxy and Earth. The blue/white narrow beam indicates the small area of the DLA gas cloud probed by quasars, the wider red cone of light indicates the large area of the DLA probed by galaxies, which is a 100 million-fold increase in area. Credit: Adrian Malec (Swinburne…

2 Responses to From Keck: “Solved! 40 Year-old Mystery on the Size of Shadowy Galaxies”