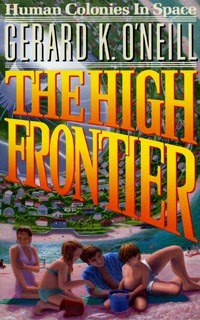 The 1970s design of a rotating cylinder for housing thousands of residents is known as an O’Neill cylinder, named after American physicist Gerard K. O’Neill, who proposed the design in his 1976 book, The High Frontier: Human Colonies in Space, in which he mapped out a practical path for humans in sustainable space habitats using 1970s material and know-how. It has been reprinted, revised and updated since its first publication.

A more recent design is the McKendree cylinder, a rotating space habitat originally proposed in 2000 by NASA engineer Tom McKendree. The design differs from an O’Neill cylinder in that it uses carbon nanotubes instead of steel, permitting the cylinders to be huge (over 5 million square miles of living surface–roughly the size of Russia).

Among the ideas of both cylinder designs is the notion of a pair of counter-rotating cylinders, balancing each other out like momentum wheels to control orientation, since the plan was to make a relatively stationary habitat near Earth (as opposed to an interstellar vessel) with proper orientation with respect to the sun. Counterbalanced cylinders are not the only way to maintain orientation. However, this is an interesting idea that also doubles the surface space available for residents.

A space city of the O’Neil or McKendree variety can be seen at the very end of the recent movie, Interstellar. The science-fiction television series Babylon 5 also features a cylindrical, stationary space city. Two recent popular novels also feature, among other things, cylindrical space cities. In the Nebula Award wining novel, 2312, by Kim Stanley Robinson, there are many space habitats created from hollowed-out asteroids, called

“terraria,” that are a form of spinning O’Neill cylinders. There are also cylindrical space-city vessels in Death’s End, the third installment of the Remembrance of Earth’s Past trilogy, translated by Ken Liu (English translation published 2016). The first two novels in the trilogy were The Three Body Problem (a Hugo Award winner) and The Dark Forest), by Liu Cixin (刘慈欣).

In addition to being good habitats for local (within the solar system) space cities, the cylindrical design seems ideal for long-term travel between stars. A large cylinder can house thousands, or even tens of thousands, of residents. Movement in a single direction along the axis of spin should keep the vessel properly oriented, although it might make course changes more difficult. The annals of science fiction abound with cylindrical colony ships traversing the void to reach distant stars in journeys that will take centuries or more. That is the design of the troubled Peerless colony ship in the novel, Towers of Earth (to be released this Spring). It is also the design of the massive alien vessel in Arthur Clarke’s acclaimed novel, Rendezvous with Rama, which will hopefully be a movie some day.

Another classic example is Robert A. Heinlein’s Orphans of the Sky, featuring a cylindrical vessel in which the residents have lost sight of the nature of their mission. (The topic of generation ships in fiction is a broad one that we will discuss another time).

Probably the biggest potential problem with the cylindrical design is its vulnerability to breach. As ordinarily depicted, the vessel consists of one very large interior space. It is not compartmentalized. In general, there should be a number of layers between the outer hull and the inner open space. It should also be made of something strong enough to resist breach by collision–at least to the point where anything massive enough and/or moving fast enough to tear through the hull will hit with such cataclysmic force that an immediate loss of air might be the least of the colony’s concerns. Still, it’s a lot of atmosphere in one large compartment, and there should be systems in place to minimize that down-side.

As mentioned before, another disadvantage is the risk of falling objects. There is no real “gravity” in the vessel. Anything flying would have to deal with the spin of the ship. Things up in the very center of the cylinder would seem weightless, but as they “fall” from center, they would seem to spiral from a point of view on the surface, and the eventual impact can be devastating.

The interior of ‘Cooper Station’ an seen in Christopher Nolan’s 2014 film ‘Interstellar’, which appears to be based on the notion of a Cylinder Colony. Read more:

On the upside, the interiors can be beautiful, and there should be fewer moving parts than most other designs, making them good candidates for long interstellar voyages.

Describing the interior can be a bit challenging in novels or stories. It is far removed from ordinary experience, so readers might not automatically fill in the pieces with a brief description. The second paragraph of Chapter One of Towers of Earth, which begins in a cylindrical vessel, will describe the setting like this:

It was noon, with the starship interior fully illuminated. The floor stretched up and curved overhead. Lengthwise, the visible sections of housing, work, and play seemed to adorn the interior like pieces of a child’s game glued to the inside surface of a perfectly round tunnel. It was beautiful in its way. A view that, after all these years, was no longer dizzying.

One thing is for sure, the interior of a massive cylindrical vessel can be breathtaking, and these relatively simple designs might well make a suitable home for many future humans.

A small selection of further reading and reference in books, games and TV: