The two most basic design concepts for long-term, high-population space vessels (either orbiting space colonies or ships designed for a long-duration traverse) are the cylindrical model and the toroidal model. NASA and other space agencies have studied these design concepts for decades, and they each appear in numerous science fiction stories and movies.

Both models rely on spin to create the illusion of gravity. In essence, the ship spins around an access. People and things on the inner surface of the outer bulkhead are pressed against the inner surface (which substitutes for a “floor”) by the spin, or more accurately, by their independent inertia as the vessel spins. (Think of swinging a bucket full of water with reasonable speed and the effect of keeping the water in the bucket during the swing.)

This form of artificial gravity isn’t perfect. There is a bit of a lean to it, for instance, although the larger the radius, the less annoying (or noticeable) the lean. The ratio of the spin to the radius determines the strength of the artificial gravity. So either vessel can be designed to provide exactly 1G at the occupied surface, or any other desired degree.

Outside view of a cylindrical vessel on the cover of Arthur C. Clarke’s Rendezvous with Rama.

The cylindrical model is very self-contained. Sir Arthur C. Clarke used this model for the alien vessel in Rendezvous with Rama. Its name describes its shape. It can be short, like a roll of toilet paper, or long like a straw. The spin axis runs down the center of the vessel.

The inside can be nice and open, with atmosphere filling the center and people, houses, trees and lakes plastered against the “sides.” Residents would look up to see people and things appearing upside down on the far side.

Below are NASA concept images of how it might look inside, presuming it could be constructed with ample room for open areas. Both images are intriguing. The second features large “windows” through which sunlight can pass, and the residents can view the night sky.

There can be problems with this design. It requires a lot of atmosphere, which is both good and bad. (Good because a large amount of atmosphere is more robust than a small amount; bad because it would take a lot to fill it.) Also, an object falling from anywhere near the center would not fall straight down, but would instead seem to spiral, ultimately scraping the surface at destructive velocity. All of that open space would have to be managed carefully. 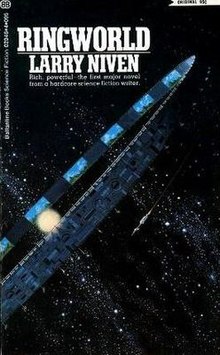 The toroidal model is a ring or hoop spinning around an axis. It requires much less atmosphere, and it reduces greatly the risk of falling objects. But it takes away that big open sky, which people tend to like.

The 2013 film Elysium, starring Matt Damon and Jodie Foster (TriStar Pictures, directed by Neill Blomkamp) features a toroidal design, with the added feature of an open interior side. The space station in the classic science fiction film, 2001: A Space Odyssey (MGM, directed by Stanley Kubrick), is also toroidal. An extremely large example is Larry Niven’s Ringword.

The design is highly practical in a lot of ways, and space agencies have been examining it for carefully for a very long time. Following are a few NASA images of how it might look.

Many other designs that take advantage of what one might call “centrifugal gravity” (a misnomer in more ways than one, as most high-school physics students can affirm), including separate modules at the ends of spindles, all spinning around a common axis. Another design that has been around for a long time, and that NASA has taken a good look at, is the Bernal sphere, first proposed in 1929 by scientist John Desmond Bernal. It would be a sphere with varying gravity depending on one’s position in the inside of the sphere in relation to the spin axis. It’s a little bit more complex than the cylinder or toroidal models, but has some advantages. The design (like those above) has received attention and been studied at Stanford University. Below are a few NASA images of how such a vessel might appear.

These ideas are important if you are considering near-term residences for humans in space, whether as a practical aim or as an element of a science fiction story. On the other hand, if you are looking farther into the future, or presuming immediate fundamental breakthroughs in gravity physics, then these concepts can be dispensed with. Artificial gravity generators are a staple in space fiction such as Star Trek and Star Wars, and when a story is far enough into the future, it seems a little silly to rely on spinning ships.

Still, I find these “spinning vessel” designs attractive as a story-telling setting, provided it fits the era and feel of the story I’m trying to tell. Leaves of the Fall is one short story along those lines, and my soon-to-be released novel, Towers of Earth (Double Dragon Publishing), is another. There are interesting nuances to these vessels and life within them, and since humanity’s foreseeable ventures into the void will probably rely on this form of artificial gravity, it makes sense to accept these designs as an integral part of stories exploring humanity’s early reach for the stars.

The same is true of the light-speed limit of relativity, which we can discuss another time.