It’s was a year ago this month that my flash-fiction story, “Procyon Descent,” was published, and the reactions I get from readers that normally like my work are still mixed.

The idea that colonists from Earth will traverse the gulf between stars in generation ships to finally claim a new world is not new. It has been the subject of many books and short stories, and even some movies. But the backdrop is still rich with possibilities. Hardship will abound, and “Procyon Descent” should, if I did my job, make us wonder whether we today could fairly judge the actions of those that ultimately endure the traverse.

Some find the story shocking, depressing or grim, which it is in a slightly Lord-of-the-Flies vein. But I also see, at its core, sacrifice, determination and a ray of hope. Farther Stars Than These, edited by E.S. Wynn, agreed to publish the very short story. Of course, you can decide for yourself if the short tale is worth telling. Will they survive? Did they take appropriate action? It begins like this:

The day comes too soon. I work up the length of the crop terrace. My waist-high row is lined with scrawny beets sucking what they can from the muck of the nutrient stream. Across is a row of an old Earth grain called barley, followed by eight rows of sheet fungus and more rows of stuff we call food, lining the curved floor that turns up and out of sight behind the matching curved ceiling. It wraps around back to here, everything pressed to the floor by the spin of the ship that’s been groaning under the strain for over 800 years. Or so it’s told. The lights wink.

Megan, two rows over, slows her gray-water flow to a trickle. “Just seems.”

I gawk a moment, seeking her eye, just to confirm someone shares this feeling of being rushed. I see it’s so. But it doesn’t help. 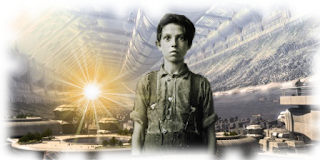 I’ve written many uplifting stories. This one probably does not top the list in that category. And if you are opposed to anything containing violence, even as an integral part of the story, don’t read it.

It’s 971 words long, all told. The story is still available to read at Farther Stars Than These. That site permits comments, as does this. If you choose to read it, please feel free to react.